Tempera as Both an Accelerator and a Stabilizer of Imagination in the Works of L. T.

Both drawing and tempera play a specific essential role in the work of Lubomír Typlt. They offer space for spontaneous experimentation, for searching and validating painterly directions (functioning as a kind of a painter’s preparatory study). At the same time, they represent a distinct autonomous world of images, one that documents the development of the artist’s iconography, as well as groups of motifs, through transformations, series, combinations, and variations. Studies and sketches often flip-flop into new, unexpected, and surprising discoveries. These are related to the expansion of configuration options as well as colour, shape, composition, and articulation solutions; and to the reduction of the motif through its clarification, or, conversely, its visual complication, disassembly, concealment, semantic repolarisation, replication, etc.  New and different (parallel) views open of the same physical states and relationships between figure and place. Traditional depictions relax and unfold in favour of experiments with space and colour (Panic, 2015; Anxiety, 2016; Escape, 2017; Visionaries, 2017).

As a painting technique, tempera has several exceptional advantages. It enables the artist to work  quickly and immediately with his chosen motifs and ways of transforming them. It acts both as an accelerator and subsequently as a stabilizer, giving rise to visual series of a particular motif, varying it within its structural (relational) definition and colour construction. Just by virtue of the fact that the tempera technique is restricted to a smaller format (paper), it does not limit the artist as much as regards his natural intuition and latitude as does traditional oil painting. This specific aspect of the artist’s work is explored in more detail in the publication Resonance: Jiří Načeradský, Josef Bolf, Lubomir Typlt.[1] Examples of Typlt’s temperas, gouaches and drawings have been reproduced primarily in the single-artist and group catalogues published in 2002,[2] 2005[3] and 2007.[4]

In his temperas, Typlt’s free manipulation of form leads to the confirmation of the open – or closed as the case may be – nature of his painterly expression as well as to an examination of his compositions in their colour construction. Drawing searches for colour and vice versa. The colour possibilities of tempera and gouache on paper differ from those of oil on canvas. Typlt uses a sharp transition between pure colour and its refraction to reassess the modelling of figures and the spatial qualities of objects (Tribunal, 2017). This technique allows both a radical communicative expression and a calmer execution. Temperas remain in a state of immediate painterly formation, in open raw forms, which configure the undulating dynamics of the visual image as a whole (Storm, 2010; Comet, 2017). The openness of forms corresponds to the nature of the direct artistic vitality, creating a compact visual world out of the chaos of formlessness. Initial invention goes through a process of stabilization, further expansion, and reassessment. Sudden impulses and their more elaborated versions have the same validity in terms of the dynamics of the artist’s work.

Temperas are an irreplaceable source document for monitoring the development of motifs in Typlt's paintings. Two basic thematic areas appear in them – just as they do in his paintings – the first is the figure in relation to vital and vegetative life expressions (emotion, movement, sleep, interaction, communication, play, etc.), and the second is the metaphorical world of human constructions and products that make use of (consume) human knowledge, energy, and time. Reason constructs “imperfect organisms” that should serve man; often, however, they go against humanity’s interests, or even mirror the absurdity of self-destructive human behaviour (such as the principle of innocent children’s games and purposeful systematic manipulation, the principle of constant balancing of accumulated and expended energy, cloning, speed, competition, etc.). It creates a kind of warning mechanistic-machine abstraction, which ironically flip-flops the function and dysfunction of machines in relation to humans with regards to their actions, consciousness, and conscience (Mobilisation, 2002; Bicycle with Watering Cans, 1999; Condenser, 2003; Bicycle, 2008; Peleton, 2008; High Frequency, 2016). Behind the mechanical motion of machines and data, a Dadaist basis for personified social scepticism can be detected, which Lubomír Typlt acquired primarily through the artistic legacy of Marcel Duchamp (Hydroelectrical Plant with Cone-Shaped Condenser, 2008; Tables with Ellipses, 2008; Hydroelectrical Power Plant, 2008).

Typlt often elaborates a particular theme or motif in his temperas. His works in this medium include studies for large format paintings (Bicycle with Watering Cans, 1999; House, 1999; Offensive, 2000; Boy with Watering Cans, 2002; Yellow-Green Hydroelectric Power Plant, 2003; Pinocchio’s End, 2005; Council, 2017; Comet, 2017; Escape, 2017; The Corn Eaters,  2017). In some of his drawings we find interlinked motifs, which did not find their way into the final paintings. Some examples include his combinations of a bathtub and watering cans (Cleopatra’s Bath, 1999); a watering can, sheets of glass, and a cat (Cat in the House, 1999); or barrels and “power plants” (Rampart, 2000). His study of a cat drinking from a watering can from 1999 is exceptional. The motif reappeared in a modified form in one of Typlt’s paintings from early 1999 (Cat with Watering Can). Typlt’s most important themes include sarcastic morality (Sore Mouths, 2004; Go Sit in the Corner – For Shame!, 2004; Pinocchio’s End, 2005; Crybabies, 2010), themes expressing existential anxiety (The Knacker’s Children, 1996; Panic, 2015; Anxiety, 2016; Dolls With Dolls, 2016; Dark Monday, 2017), and mementos of a deadly collapse metaphorically expressed with a sheet of clear glass, the load bearing capacity of which is tested by a nude human figure (Feet, 2004; Shoe Rack, 2005). An entirely separate chapter comprises motifs of repeating figures that refer critically to the genetic and mental cloning of human beings, and the gruesomeness of everything that presents itself as self-similar, and as anonymous and alienated through similarities or sameness (Unit, 2016; Tribunal, 2017; Sleeping Parliament, 2016; Brothers, 2017). Two drawings from 2002 of hybrid hands with phalluses instead of fingers (Hands; Three Hands) remained episodic.

In connection with Lubomír Typlt’s temperas, it is impossible to ignore the fact that this same technique was used during the second half of the 20th century by key representatives of German painting such as A. R. Penck, Georg Baselitz, and Markus Lüpertz, specifically to verify the colour and shape variations of figural compositions and configurations of objects. In Czech painting, this innovative approach may also be found in the works of artists such as Jiří Načeradský and Jiří Sopko. In this respect, Lubomír Typlt is extending the painterly tradition that was his starting point, but, at the same time, he is updating, modifying, and radically transforming it – naturally, and in connection with the horizons of his own personal visions. 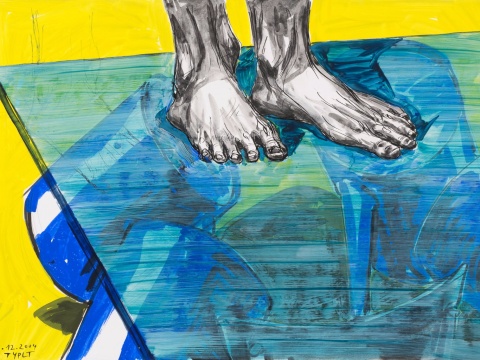 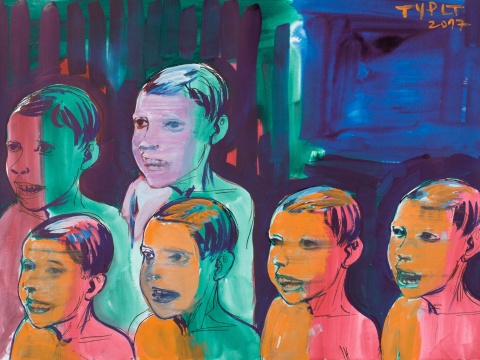 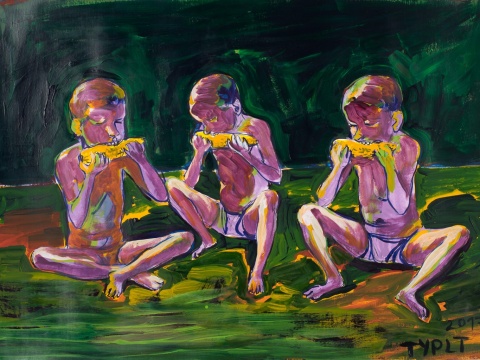 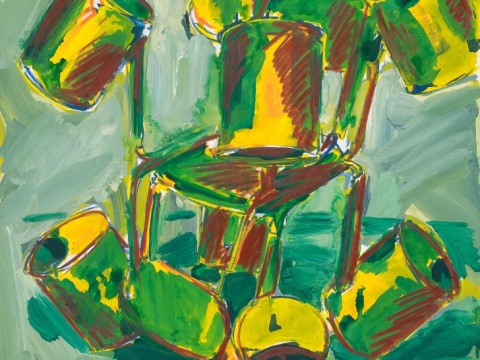 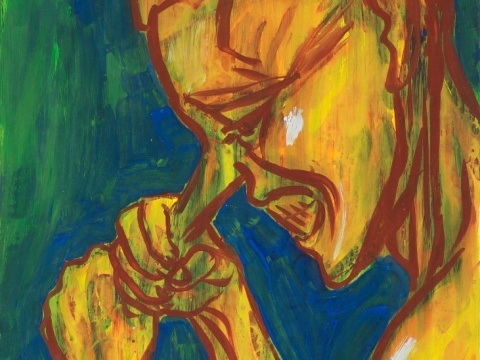 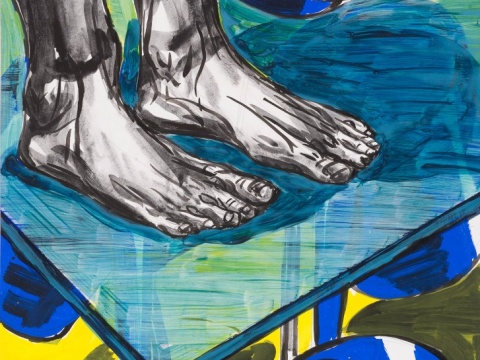 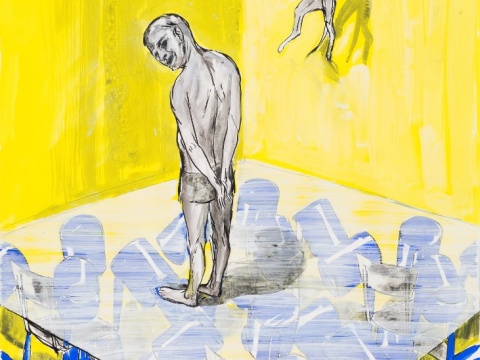