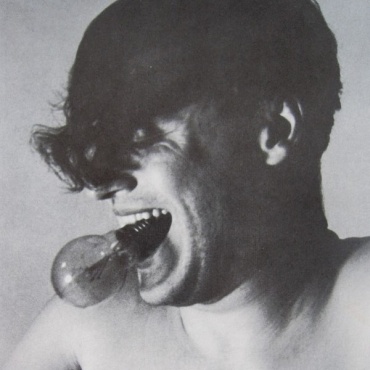 The life and work of Václav Zykmund depicts an amazingly realistic image of the 20th century. Zykmund was not only an active representative of artistic experiments, but also a critical evaluator thereof. The following text is a sketch that opens up individual episodes of the artist's life and work:

Václav Zykmund was born in Prague's quarter Liben in 1914. He went to secondary school in the town of Rakovník, which later became the setting for several of his first performance actions and exhibitions in 1933. In 1937 he founded the publication Ra in Rakovník, which foreshadowed the origin of the group of the same name, which formed during the war and officially existed between the years 1947-1948 in Brno.

Since 1932 Václav Zykmund studied drawing and descriptive geometry at the Faculty of Architecture at the Technical University in Prague. He rented a flat together with Bohdan Lacina. Their neighbour was Karel Teige, Zykmund's distant relative. Architecture, which Zykmund was studying, was certainly not the only topic of their conversations, and that is how Zykmund started to become interested in the most current cultural happenings. It was with great interest that he followed leftist discussions and magazines such as ReD. During the years 1933 – 1945 he also intensively pursued photography.

Although his photographs are of great value today, the artist himself mentions in his later theoretical work (in this respect the most essential is the book Art that Everyone Can Do? [Umění, které mohou dělat všichni ?) certain artistic superiority of free art towards photography – primarily due to the autonomous position, which he attributed to free art. (See MOUCHA Josef: Václav Zykmund, in: Fotograf: časopis pro fotografii a vizuální kulturu (Photographer: magazine for photography nad visual culture), pg. 24, volume. 7, 5th year, Prague, 2006.)

Zykmund's work is interwoven with surrealism. His paintings from around the mid 1930s attest a great liking of Salvador Dalí's paintings. From today's point of view they can appear to be disproportionately classical primarily when compared to Zykmund's photographs from the same time period. However, it is precisely Zykmund's ability to move freely between individual media, which makes his work always current and surprising. His surreal symbols are like abandoned torsos in the desert, pieces of rags, heads and bodies tied up with rope, or imprisoned in cages, or the flowing, otherwise solid objects are projected also in the artist's photographs and photograms. Zykmund's painting expression is akin with the work of the members of the group Ra, the core of which was made up of Josef Istler, Václav Tikal, Bohdan Lacina and Zdeněk Sklenář, and there is a typical gradual departure from specific shapes towards abstraction, which still contains that surrealistic tension between form and formlessness, however.

The collection of photographs and poems published in Brno in a home environment in 20 copies prior to the end of World War II got its title from the symbol in the shape of a compass, which had accompanied a number of events which Václav Zykmund either organized or participated in. Ludvík Kundera, who met Zykmund and Bohdan Lacina in 1943 after returning from army service in Berlin, recalls in his text from Passing Moments (Letmá zastavení) (see Václav Zykmund: 15 December 1999 – 13 February 2000. Brno: The Brno House of Arts, 1999, pgs. 7-8) how Zykmund used to paint this motive on the faces of the participants of obfuscator photographic parties. It was precisely Kundera who accompanied the photographs with texts. Or, as Václav Zykmund comments, was it Kundera's texts that he later illustrated?

"I actually think that the method that I used in Threatening Compass, is still only a hint to something by far not exhausted; although I certainly cannot deny the happening of its "liberating" moments of similar kind that our pre-happening actions were prior to the actions, it still appears to me that the insidious presentation of a mystery is too much suppressed in them and that completely spontaneous and not programmed fantasy bestows the final reality of much more human moments.", wrote Václav Zykmund in 1984 at a time when as a respected art theoretician and teacher he could afford to evaluate his actions in which he surpassed time. Although in the text cited (see DUFEK Antonín: Photographic Games of Václav Zykmund [Fotografické hry Václava Zykmunda], in: Václav Zykmund: 15 December 1999 – 13 February 2000. Brno: The Brno House of Arts, pg. 17, 1999.) he refers primarily to activities that he organized together with friends during the occupation, he had organized similar actions on his own since the mid 1930s. An inseparable part thereof were photographs taken either by Zykmund or Miloš Koreček. The photographs from these meetings balance on the verge of artistic surreal photography and documentation.

Putting together surreal objects and photographing hairdressing dummies or puppets during the first half of the 1930s led Zykmund all the way to creating puppet films (which he cooperated on with his wife Anna or poet František Hrubín). Václav Zykmund was pushed to making animated films from another side, however, which was the situation after 1948, when the abolishment of art groups and collectivization of artistic production took place. During this time Zykmund finds asylum in intensive studying of Marxism (he had been a member of the Communist Party since 1933), as well as in Brno's film studios. His first puppet film was Raven and Tortoise, and later he made five animated films for children on the themes of Josef Věromír Pleva.

Critic and Theoretician in a Moment of Crisis

At the beginning of the 1950s Václav Zykmund was invited by the Association of Fine Artists to present his paintings, which were evaluated by the optics dictated by socialistic realism. Zykmund's paintings stood the test, however, it was neither his surreal landscapes, nor abstract compositions, but quickly painted program paintings. Zykmund managed to withstand, surely at the expense of certain personal concessions, the period idea pressure and defend, from the position of a critic and curator, nonconformist creative expression, which was labelled by the governing position as "formalistic" – hence anti-socialist.

The loosening of the regime at the end of the 1950s made it possible for a number of artistic groups to form. One of them was Parabola put together in 1962. In the manifest of the group written in 1963, Václav Zykmund makes an appeal for the need to create not only on the basis of incentives of the outer reality, but also on the basis of inner incentives. Plurality of expression was not only the basic instance of the group, the members of which were, for example, Dalibor Chatrný, Vladimír Merta, Rudolf Fila or Eduard Ovčáček, but also Zykmund's guide to teaching art, to which he got access in 1960 as the head of the Fine Arts Department at the Faculty of Philosophy at the Palacky University in Olomouc (where he worked until 1972), but also as a lecturer at the Academy of Fine Arts in Bratislava (until 1965). The 1960s became the climax, not only for Zykmund, of an imaginary parabola. He was a member of the international association of art critics AICA thanks to which he travelled all over Europe as well as overseas. He got a government grant in Paris and as a government member he participated in a number of international meetings. The commencement of the Normalization period meant a quick descent from all positions for him, the need to publish under pseudonyms, but also the return to making his own artwork.

From the beginning Zykmund's work included drawings, graphics and collages. He published his first collection of graphic sheets Transformations (Proměny) in 1936. Naturally, the intensity of his graphic work increases with the difficult periods when he has to become artistically humble. These periods took place in the 1970s and 1980s when the artist started to intensely work on collages, which reflected cynicism, black humour and absurdity. He maintains the small format of his work until his death in 1984. His work in the last few years of his life, often untitled informel graphics, collages from fashion magazines, or small assemblages, returned to the beginnings of his work – to modernism and they recycled it in a creative manner. 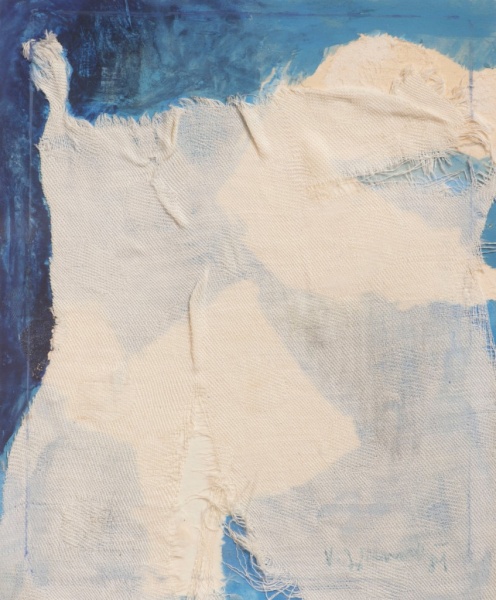