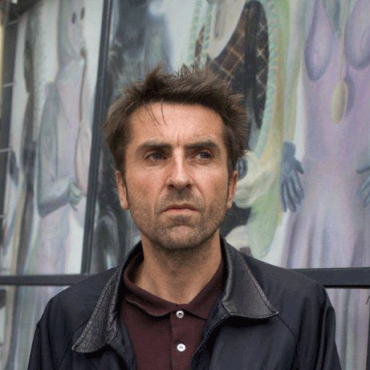 In Jiří Petrbok's painting you come across a very strong visual phenomenon, which is the intersection of imagination and the objective form. It is the image creation that models figures' resulting forms. For the artist human figures are mainly a strange displaced element that when thrown out of the window returns through the door. These phantoms arising from a grey area of the subconscious are rather something than someone. Automated machines are portrayed as bearers of frightening traits, which remind us of something, refer to something, generally to some objective physical debilitation – of movement, in breathing, with sight, etc. The body combusts, burns, is sticky, it runs and melts away somewhere. It disappears. With such set-up, claustrophobic nudes Petrbok makes light of elegant situations through humour based on the actors' poor motor skills or the embarrassment of unexpected meetings of „something with someone."
Self-installation into the context of his works ranks among Petrbok's proven processes. It is most evident in his picture Procházka na nábřeží /Walk along the Quay (2003). A nuclear family walks along the quay with their stroller, in the background they are framed by Hradčany and the Prague Castle, while one of the members of their immediate company needed for the survival of the human race (the father) is burning up in a fatal flame. This puzzle can be interpreted in various ways: and ones that send chills up your spine. The manic agitation begets a monster and „his ego burns." This is a figuration in the manner of psychiatric situationalism captured in a painter's symbol (short-cut). The image suddenly functions as a very suggestive probe under the surface of a pragmatic and materially-oriented society massaging the egos of its idols and thus pulling asunder its actual seemingly-stable foundations. In the end it doesn't matter whether the figure is an artist, a collector, a manager or a politician. Ultimately they are only a patient listed in alphabetical order in the doctor's card catalogue: from A to Z. 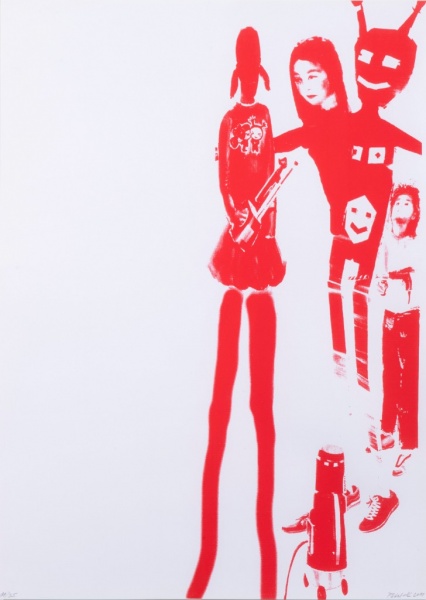