Vytiska had already created something of a stir while studying at the Faculty of Art of the University of Ostrava and thanks to him the university was nominated for the StartPoint international competition of best art school graduates. In 2011 he won the UniCredit Bank Prague Young Photo Award at the Art Prague contemporary art trade fair, and the following year was one of the finalists of the Critics' Award for Young Painters.

Though Vytiska studied at the intermedia studio at university, he treats "intermediality" more as a personally conceived process of the creation of the painted picture. There was not and is not space here for purity of expression, one voice and one language. Instead the buzzwords are hybridisation and the mutation of motifs, approaches and inspirations. However, this is not about an explosive darting between miscellaneous media, but rather a kind of implosive absorption, a personal synthesis of diametrically opposite aspects incorporated into one and the same medium.

Vytiska suggestively arranges bizarre post-apocalyptic scenes put together from fragments of ghostly scenes and filled with different individuals, perhaps people, perhaps mutants, or simply monsters whose visage in burnt or musty ruins itself makes reference to the morbid details of primary painterly inspirations of highly charged experiences, to life in Wallachia, overheard stories filled with absurd situations and points, or the artist's fascination with B-films, street art and the DIY aesthetic.

The outcome of this scrummage of motifs and inspirations are pictures and paintings whose strangeness attract both the layperson and the informed viewer. Vytiska has managed to rise above the speculation and conceptualisation of the artistic gestures and replace them with the directness of imaginative suggestion. However, in addition he has balanced the risk of a cheaply effective flashiness based on a fascination with morbid or programmatic illustrativeness. That which he is fascinated by and what emerges again and again in his imagination (the prolapsed eye, a werewolf, a burning cottage) is not simply a superficial means by which to shock the masses. It is, on the contrary, confirmation of his fascination with the Other, with the strange, a fascination with the dynamic tension resulting in discontinuous connections, breaches of the regular, making visible the unexpected or actualising the traumatic.

The comic and the tragic that wait in the wings are so naturally and intimately intertwined that it seems to be the artist's intention to show the viewer that each is made for the other, they are inseparable, that they form part of our daily panoptical cabaret, that we don't wish to know or even suspect. A cabaret in which there is no room for criteria and rankings, for high and low, but where something strange despite all restrictions, impediments and improbabilities germinates or appears as weeds and self-seeded trees emerge in prohibited zones, deserted settlements, derelict buildings or forgotten brownfields in the centres of our cities. 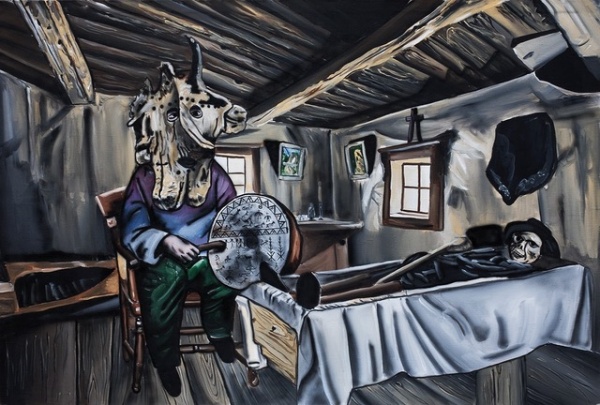 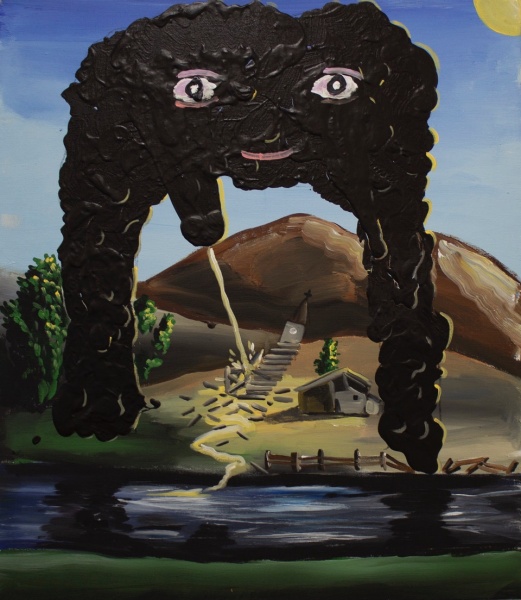