The work of Anežka Hošková can be linked to the international current of mythical, associative painting or drawing and post-Internet aesthetics. It is formed through dialogue with artists pursuing this orientation on the Czech as well as international scenes. Nevertheless, in addition to the rather formal similarities Hošková developed an original style, which is not only connected to the means of expression in the sphere of contemporary art but also with her interest in alternative music and DIY culture, fashion or the layering of image-textual information on social media. Her work freely penetrates through all these areas, which often serve as a source of inspiration for her thematically as well as mechanically challenging works. From the exhibition of paintings and installations Hošková’s work mutates into the posters for the music festival Creepy tepee, which she co-organizes, or it transforms into a daily whirlwind of pictures downloaded from the Internet or found in old magazines through the layering of which Hošková’s Facebook page, as well as the “visual database” in her studio, become a thaumaturgic synthesis of eroticism, peculiar styles, cats, religion symbols and bizarre situations, which are often used as a flashing background for her DJ performances, or that close the circle by returning to the gallery environment remodelled into a series of collages photographed on a mobile phone (Tropical Winter, 2013). Last but not least, Anežka is her own creation with her iconic appearance that is the missing piece of the entire jigsaw puzzle.

During her studies in the Studio of Václav Stratil at the Faculty of Fine Arts in Brno, Hošková pursued primarily painting. Her paintings that are characteristic with their sharp, almost calligraphic line and clearly defined coloured surfaces opened up a game with autobiographic motives and a desire to capture the surrounding world interwoven with symbols out of which at that time the artist was fascinated by primarily those connected with death and darkness. For example, in her series of large-format acrylics on canvas titled I Love You But I’ve Chosen Darkness (2006) the surrealistically toned paintings are intermingled with hearts and spades with thorny plants producing mysterious constructions or coffins and creatures balancing on an imaginary rope between power and decay. In her most recent work Hošková’s style is showing a sense of ease and her originally sharp boundary between painting and drawing is wiped. Black lines often define bleeding watercolour, motives are finer and rather than being a dark game of life and death, they are becoming a sensitive balance over a rhythm, through which seemingly non-homogenous visual elements are grouped to ecstatic and melancholic units (Egyptian Reggae, 2010, BLKFLMNGO II., 2011).

Although drawing and painting continue to be the cardinal media for Hošková, in many of her projects she works with their overlapping – she’s had a number of large-format paintings on gallery walls and recently she has also had installations or performances. Hošková collects symbols and spiritually charged motives, as well as often bizarre artefacts, which transform a painting to an object (Bongo Bongo 2012), or they become completely solitary and from an exhibition they form a small world for themselves (The New Dark Age of Love, Galerie výtvarného umění Cheb, 2013). In her exhibition Vlčice noci (Bitch Wolf of the Night) in Karlin Studios (2014) the artist was a part of her installation made up of a pair of paintings and a dining table with her head sticking out of the centre of the table. Her artificial hair extensions woven between mirrored pillars created an impression of a Medusa, whose mythical decapitation added to the bewitching image. This action became the embryo of a more long-term project Analogue Witch, which the artist subsequently developed, for example in the exhibition Graphical Design in the Centre for Contemporary Art Futura (2014).

Anežka Hošková managed to create her own microcosm where everything is related. Intertwined here are boundaries between “high” art and pop culture, visual art and music, artwork and everydayness, conviction and irony. This world is ruled by distinctive humour, slightly perverted romance and positively tuned witchcraft, which are maybe exactly those ingredients that add to the authenticity and originality of Hošková’s work. 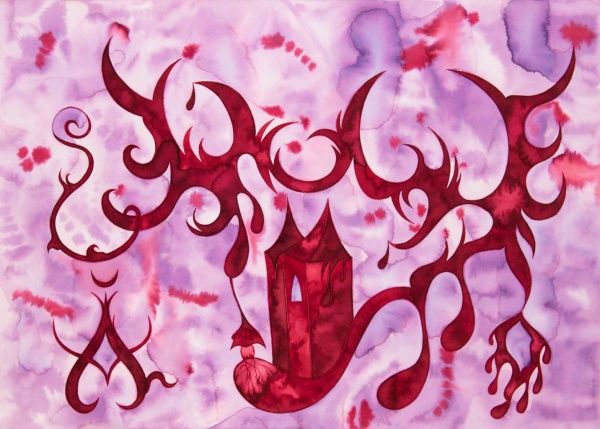 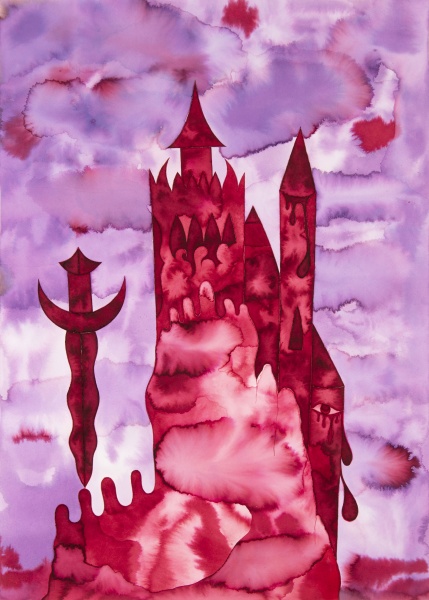